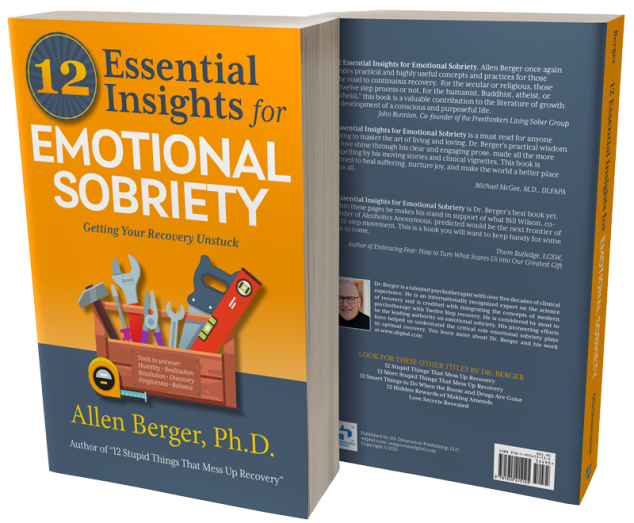 In a special supplement to the New Hampshire Bar Association (NHBA) News – Living Well in 2022: Balancing Your Professional and Personal Growth – NHBA staffer Scott Merrill wrote an article Emotional Sobriety Means Not Being Addicted to Our Thoughts. Dr. Allen Berger was interviewed for the article. The text of that article appears below. To download the full supplement, click on the button to the right.

For attorneys, and everyone struggling with addiction, confronting the thought of shame may be one of the most difficult obstacles on the road to recovery.

Doctor Allen Berger, a psychologist, recovering addict, public speaker, and author of numerous books about emotional sobriety, said to break this spell people must learn to stand on their own two feet.

But supporting ourselves, and asking for help, especially if we’ve never learned how, can be difficult because of our developmental experiences as human beings, as Berger has witnessed throughout his life and career.

Early in our development as human beings, we are completely dependent on our environment. As we grow older, a process of differentiation takes place that is shaped by parents, friends, and our culture. How this process plays out shapes our attachments, as well many of our dependencies and addictions.

In 1953, Bill Wilson (known as Bill W.), who alongside Doctor Bob, was one of the founders of Alcoholics Anonymous (AA), wrote a letter that was published in the AA journal, “Grapevine,” speaking about the ways human beings become “victimized by false dependencies.”

“For my dependence meant demand, a demand for the possession and control of the people and the conditions surrounding me,” Wilson wrote. “If we examine every disturbance we have, great or small, we will find at the root of it some unhealthy dependence and its consequent demand. Let us, with God´s help, continually surrender these hobbling demands. Then we can be set free to live and love: we may then be able to gain emotional sobriety.”

Berger says the idea of emotional sobriety didn’t catch on right away because of a “spiritual bypass” that took place at the time that led many people to “turn everything over to god.”

Throughout his career, Berger says he has had the opportunity to treat many attorneys and other professionals and he has noticed a number of themes. One of them is the public persona and the fear of shame.

For a lot of attorneys, it’s shame that makes it very difficult to go to a general AA meeting, he says.

“In California we have what’s called the Other Bar,” he says. “Meetings for attorneys to meet and talk. Some of them were taking retainer fees and spending them on drugs, all kinds of things, such as poor representation of their clients. It can be very difficult for attorneys to share and talk about because the shame is so great.”

For Brendan Cahalin, a former Merrimack County Attorney who is now with NH Public Defender, shame, combined with alcohol, nearly cost him his life and his job.

Cahalin, 33, turned to alcohol at a young age, and later in life he used it to avoid difficult feelings. This avoidance led him in and out of numerous psychiatric wards, detox and recovery facilities, and sober houses.

The best description of the way emotional sobriety works, Cahalin says, comes from an experience he had with his former boss, former Merrimack Country Attorney Robin Davis.

He received an email from Davis while at work one day that said she wanted to see him.

As it turned out, Davis only wanted to commend him on the work he was doing.

He attributes his initial response to the “stories” we all have in our minds that often have no basis in reality.

He eventually told Davis his story that he’d “made up” prior to their meeting and that it aligned with his own story about himself.

“We have such a deep trench in our neuropathways that I wasn’t aware of it,” Cahalin says. “Starting to do things differently has changed the way my brain works and the way I think. Having a conversation with Robin turned into a two- or three-hour conversation. Doing that new action, I think that got me out of the rut I was in. And I think it has changed the way my brain circuitry operates. It still happens, but when it does it’s not as strong.”

Emergency Medical Specialist, Dr. Andrew Seefeld, in Plymouth, NH, says he became interested in emotional sobriety during his recovery from alcohol use disorder.

He describes his journey similarly to how Cahalin does, referring to his thinking patterns as “emotional thought addictions” that he says everyone has, to one degree or another.

Seefeld, who holds weekly emotional sobriety meetings, says the question to be asking is why people choose these behaviors to begin with.

“This is what my emotional sobriety is all about. We have thoughts as humans. We have emotions that come with thoughts, and then we have behaviors associated with the emotion,” he says. “With addiction, that becomes maladaptive, and you see that with alcoholics because it’s right there in your face. Less so with people addicted to gaming or social media. Most people don’t see those things like that, but social media is like fentanyl. The brain doesn’t see it any differently.”

Berger, who continues to publish and speak publicly about emotional sobriety, says behavioral change is possible but it begins when with the first step of admitting powerlessness.

“The paradoxical theory of change operates you admit you’re powerless to find power, you admit your life is unmanageable, to learn how to manage your life better,” he says. “Being an addict is like Miracle Grow.”

“No one’s a half-assed alcoholic. And that’s true of our false self, too. Once we’ve decided that we need to be someone we’re not, we grow that. Just like we grow our alcoholism. So now, we want to switch that…the consciousness that created the problem can’t solve it. Bill W. calls it developing the best possible attitude we can have towards life.”