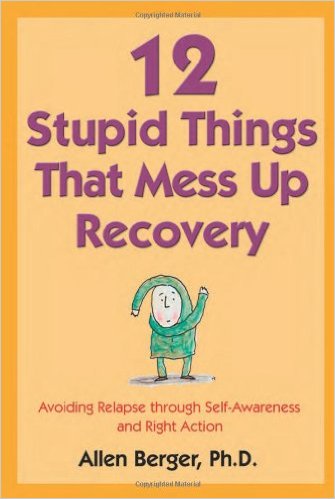 An excerpt from
12 Stupid Things That Mess Up Recovery
by Allen Berger, PhD., Hazelden Publishing

Luther, a client of mine, comes to mind. He had been sober for three years when he began seeing me for psychotherapy. Our first meeting was most unusual; he began by telling me he wasn’t certain why he was seeing me. He went on to tell me that his life was better than ever. He had three years of sobriety, his job was secure, his health was good, he wasn’t depressed or anxious, and his desire to drink and use had been lifted. The one thing that was missing in his life was a relationship.

At forty-two, Luther had never been in a committed relationship. He didn’t start dating until college, and none of his dates seemed to amount to anything serious. He was confused. He said that on paper he looked great. He was of average appearance, quite successful in his line of work, attended church on a regular basis, and his one bad fault, his drinking, was being addressed. “I just don’t understand. Why aren’t women interested in me?” he asked in a tone that also pleaded, “Help me—I am terribly lonely.” (Interestingly, he hadn’t identified loneliness as a reason he was seeking help.)

I asked him to describe the last date he’d had in as much detail as he could remember. He went on to describe the most boring evening one could imagine. Luther was so shut down and out of touch with his feelings that there wasn’t much of him there to connect to.

It was no surprise that this woman wouldn’t want to see him again. I pointed this out, but oddly, my observation didn’t seem to bother him. I was curious about his air of indifference.

As we explored his reaction to my feedback, it became clear that he prided himself on what he called his “independence.” He didn’t want to need anyone or ever depend on another human being. I probed deeper and learned that his mother was quite domineering. She controlled him and his father, and always seemed to consume all the oxygen in a room. To cope, his father withdrew from her demands. The parents rarely communicated; Luther’s father just complied as much as he could or avoided interactions altogether.

With this as a model for how relations between men and women work, Luther determined that his best bet was not to expose much of his inner self. He concluded that one could not be independent when in a relationship. In other words, he had no models of a healthy relationship, one in which both partners hold onto their sense of self while also being part of a loving, supportive relationship.

Interestingly, Luther told me that he depended on God and claimed that his strong spiritual program had helped him rise above the needs and desires most people have, and for that he was happy. It seemed to me that he was proud of that fact. “Emotions are complicating factors in life, and I’ve done much better since I’ve erased my needs and emotions,” he said.

I pointed out to him how objective he sounded, and that it seemed like he had forgotten how to let himself really need or want something. This observation seemed to pique his interest. Like many damaged people, Luther had lost interest in himself and settled for a half-lived life. He had forgotten—or perhaps had never learned—how to listen to the desires and drives of his true self.

He was also using his dependence on his relationship with God to avoid addressing—to bypass—the needs and emotions that made him a unique human. He had created a safe cocoon to live in, but there wasn’t room in it for a woman. Here was only room for Luther and his brand of spirituality, and he was becoming quite lonely.

He was terrified of being consumed and lost in a relationship—which was understandable, given his history. He defended against this fear by using his spirituality to reinforce the idea that he had no emotional needs or wants—he was a kind of saint, devoid of all worldly interests. He thought that he could live his life free of desire, but this left him feeling like an empty shell incapable of being in an intimate relationship.

The truth is that a part of Luther had buried the pain of witnessing his parents’ relationship, where the only options were to dominate and control, or clam up and be “independent.” His long-buried pain was emerging, and it manifested as the growing loneliness that brought him to see me. We need other people—it’s that simple.  The emergence of Luther’s recognition of this need was a good sign that he was ready to begin Stage II recovery and develop a healthy spirituality that allowed for the messy needs and emotions that a committed relationship calls up.

Luther worked hard with me for the next couple of years and focused on dealing with his unfinished business with his parents. He focused on developing the ability to stay true to himself while being connected to someone he cared about. It was tough going for a long time. He became quite anxious for some time, which he hated, but he hung in there, found a partner, and learned that he could have a healthy relationship while holding on to his true self and practice a more mature spirituality. At this writing, he’s been married for five years.