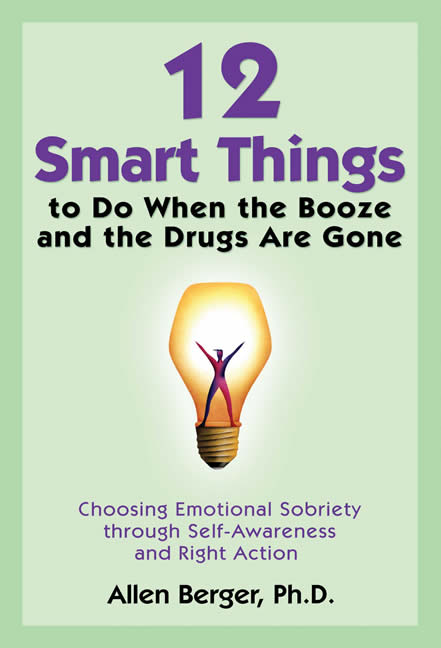 An excerpt from
12 Smart Things to Do When the Booze and Drugs are Gone
by Allen Berger, PhD., Hazelden Publishing

To better define emotional sobriety, I want to unpack a letter that Bill Wilson wrote to help a depressed friend. In fact, this was the first piece of literature that mentioned the concept of emotional sobriety.

Bill’s Letter on Emotional Sobriety
I think that many oldsters who have put our “booze cure” to severe but successful tests still find that they often lack emotional sobriety. Perhaps they will be the spearhead for the next major development in AA—the development of much more real maturity and balance (which is to say, humility) in our relations with ourselves, with our fellows, and with God.

Those adolescent urges that so many of us have for top approval, perfect security, and perfect romance—urges quite appropriate to age seventeen—prove to be an impossible way of life when we are at age forty-seven or fifty-seven.

Since AA began, I’ve taken immense wallops in all these areas because of my failure to grow up, emotionally and spiritually. My God, how painful it is to keep demanding the impossible, and how very painful to discover finally, that all along we have had the cart before the horse! Then comes the final agony of seeing how awfully wrong we have been, but still finding ourselves unable to get off the emotional merry-go-round.

How to translate a right mental conviction into a right emotional result, and so into easy, happy and good living—well, that’s not only the neurotic’s problem, it’s the problem of life itself for all of us who have got to the point of real willingness to hew to right principles in all our affairs.

Even then, as we hew away, peace and joy may still elude us. That’s the place that so many of us AA oldsters have come to. And it’s a hell of a spot, literally. How shall our unconscious—from which so many of our fears, compulsions and phony aspirations still stream—be brought into line with what we actually believe, know and want! How to convince our dumb, raging and hidden “Mr. Hyde” becomes our main task.

I’ve recently come to believe that this can be achieved. I believe so because I begin to see many benighted ones—folks like you and me—commencing to get results. Last autumn depression, having no real rational cause at all, almost took me to the cleaners. I began to be scared that I was in for another long chronic spell. Considering the grief I’ve had with depressions, this wasn’t a bright prospect.

I kept asking myself, “Why can’t the Twelve Steps help to release depression?” By the hour I stared at the St. Francis prayer … “It’s better to comfort than to be comforted.” Here was the formula, all right. But why didn’t it work?

Suddenly I realized what the matter was. My basic flaw had always been dependence—almost absolute dependence—on people or circumstances to supply me with prestige, security, and the like. Failing to get these things according to my perfectionist dreams and specifications, I had fought for them. And when defeat came, so did my depression.

There wasn’t a chance of making the outgoing love of St. Francis a workable and joyous way of life until these fatal and almost absolute dependencies were cut away.

Because I had over the years undergone a little spiritual development, the absolute quality of these frightful dependencies had never before been so starkly revealed. Reinforced by what Grace I could secure in prayer, I found I had to exert every ounce of will and action to cut off these faulty emotional dependencies upon people, upon AA, indeed, upon any set of circumstances whatever.

Then only could I be free to love as Francis had. Emotional and instinctual satisfactions, I saw, were really the extra dividends of having love, offering love, and expressing a love appropriate to each relation of life.

Plainly I could not avail myself to God’s love until I was able to offer it back to Him by loving others as He would have me. And I couldn’t possibly do that if I was victimized by false dependencies.

For my dependency meant demand—a demand for the possession and control of the people and conditions surrounding me.

While those words “absolute dependency” may look like a gimmick, they were the ones that helped to trigger my release into my present degree of stability and quietness of mind, qualities which I am now trying to consolidate by offering love to others regardless of the return to me.

This seems to be the primary healing circuit: an outgoing love of God’s creation and His people, by means of which we avail ourselves of His love for us. It is most clear that the real current can’t flow until our paralyzing dependencies are broken, and broken at depth. Only then can we possibly have a glimmer of what adult love really is.

Spiritual calculus you say? Not a bit of it. Watch any AA of six months working with a new Twelfth Step case. If the case says, “To the devil with you,” the Twelfth Stepper only smiles and turns to another case. He doesn’t feel frustrated or rejected. If his next case responds, and in turn starts to give love and attention to another alcoholic, yet gives none back to him, the sponsor is happy about it anyway. He still doesn’t feel rejected; instead he rejoices that his one-time prospect is sober and happy. And if his next following case turns out in later time to be his best friend (or romance) then the sponsor is most joyful. But he well knows that his happiness is a by-product—the extra dividend of giving without any demand for return.

The real stabilizing thing for him was having and offering love to that strange drunk on his doorstep. That was Francis at work, powerful and practical, minus dependency and minus demand.

In the first six months of my own sobriety, I worked with many alcoholics. Not a one responded. Yet this work kept me sober. It wasn’t a question of those alcoholics giving me anything. My stability came out of trying to give, not out of demanding that I receive.

Thus I think it can work out with emotional sobriety. If we examine every disturbance we have, great or small, we will find at the root of it some unhealthy dependency and its consequent unhealthy demand. Let us, with God’s help, continually surrender these hobbling demands. Then we can be set free to live and love; we may then be able to Twelfth Step ourselves and others into emotional sobriety.

Of course I haven’t offered you a really new idea—only a gimmick that has started to unhook several of my own “hexes” at depth. Nowadays my brain no longer races compulsively in either elation, grandiosity or depression. I have been given a quiet place in bright sunshine. (1958)*

Unpacking Bill’s Letter
What an incredible document! I believe this letter is one of Bill’s most important contributions. Bill makes an important point about emotional sobriety in the opening comments of his letter. He notes that even though we may have stopped drinking or using, many of us have not achieved emotional sobriety.

Emotional sobriety doesn’t spontaneously appear. We have to work hard at growing up. Bill did. In addition to the time he spent working the Steps, getting spiritual direction from the Reverend Sam Shoemaker, spending time alone in contemplation, and working with others, he also sought out psychotherapy. His therapist was the famous Dr. Harry Tiebout, the first psychiatrist to recognize the importance of the fellowship of Alcoholics Anonymous. Bill gained many valuable insights into himself and his feelings as a result of these efforts. Bill defined emotional sobriety as a “real maturity” and “balance” in our relationship with ourselves, our fellows, and our Higher Power.

We cannot have balance if we make what other people think more important than what we think. We cannot have balance or hold on to ourselves if we don’t grow up, emotionally. Therefore, it is best to think about emotional sobriety as a by-product of a particular way of being in life. Bill was an incredibly honest and humble man. He admits that he had major problems in his life because of his “failure to grow up, emotionally and spiritually.”

Isn’t this impressive—the cofounder of AA admitting he was immature? His level of humility and honesty is truly inspiring. Since maturity is critical for total recovery, our immaturity needs to be addressed in recovery.

In several of his writings, Dr. Harry Tiebout identified the cause of emotional immaturity as “infantile aspects of the child’s ego that persist into adulthood” (1999). It was Dr. Tiebout who first used the term “king baby” to describe one aspect of our behavior. He observed that we wanted everyone to submit to our will and desires.

The foundation for recovery is humility. The Twelve Steps are designed to create and maintain a sense of humility in our lives. We must learn to let go of our selfishness and self-centeredness. We must learn to get out of our own way—or rather, out of the way of our real-self. Therefore humility is also important in achieving emotional sobriety. Humility will ultimately be the foundation upon which we develop the ability to hold on to ourselves; to prevent ourselves from being knocked off balance by people, places, or things; and to not be overly influenced by others. It also puts our needs and desires into proper perspective.

Bill also described how he wanted “perfect security and perfect romance.” We are perfectionists. We have very strong and rigid ideas about how life is supposed to be, which is one of the reasons we drank, used other drugs, or did both. We didn’t know how to deal with life as it was; we wanted it our way. Bill also recognized that the emotional issues that were causing him to be depressed were deep within and, for a long time, outside of his consciousness. Bill was very insightful.

Bill mentioned that his “fears, compulsions and phony aspirations” need to be brought into line with what we know and believe.

How do we address these in recovery? The first step is to be honest with ourselves. Our greatest phony aspiration comes from our “perfectionist dreams and specifications.” We are perfectionists, whether we care to admit it or not, and we project these feelings onto circumstances and other people. This doesn’t mean that we do everything perfectly, because that’s impossible. Rather, it means we expect ourselves and others to live up to our perfectionistic specifications. We are absolute, black and white, in our concept of who we think we should be and how life should be. This is a major problem and feeds our emotional dependency.

Emotional freedom is possible. We constructed the false-self, and we can deconstruct it. Bill tells us there is hope. With much effort, we can grow up. We begin by identifying the problem. Bill identified the culprit behind his unrealistic expectations and depression. His hidden and raging Mr. Hyde was his “almost absolute dependence—on people or circumstances to supply me with prestige, security and the like.”